The Museimpresa Association was founded on October 15, 2001 by Assolombarda and Confindustria with the aim of promoting and showcasing companies that choose to prioritize culture in their communication strategy, and that view cultural investments as a modern tool for economic development and an added value for the company itself.

At the turn of the century, Italy had an extensive, varied and widespread network of corporate museums and business archives. However, it was largely spontaneous and not perceived as a “system”. The piecemeal nature of the growth and popularization of these companies meant experience, professionalism and materials were getting lost along the way. Museimpresa was a tangible response that could help companies which wanted to make the most of their cultural heritage by building virtuous circuits around them to spread information and skills.

Carlo Camerana, the first President of the Association from 2001 to 2003, was firmly convinced that museums could help companies demonstrate their ability to look to the past in order to build a better future for themselves and the business system, improving the economy’s capacity for innovation and contributing to the development of local districts and communities. 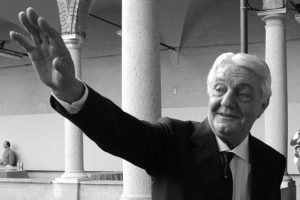 “Companies can only be represented if the museum propels them towards the future”. Carlo Camerana

Part of the history of the Association has been retraced through the recollections and words of its key players.

Interview with Michele Perini, President of the Association from 2003 to 2012

Interview with Alberto Meomartini, President of the Association from 2013 to 2019